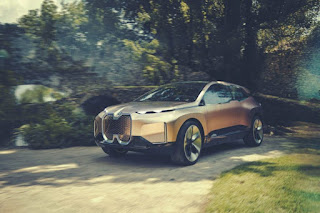 After a recent online leak of the Vision iNEXT concept vehicle, BMW has officially revealed the next generation electric vehicle described as the company's "building blocks for the future." The futuristic concept is designed around fundamental changes to the driving experience that are afforded by autonomous driving systems. In other words, with autonomous driving clearly on the horizon, BMW has focused their efforts to enhancing the personal space of the vehicle "as a mobile environment that enhances quality of life." 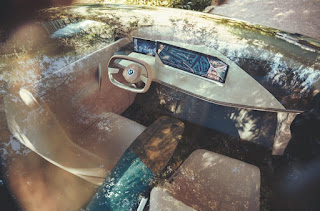 The iNEXT is designed to be a fully autonomous vehicle, but driver's can take control at any time if they desire, so those who enjoy the experience of piloting their vehicle have the ability to do so. The vehicle sports a crossover design with several next-gen features including a 3-part technology based system, an enormous sunroof, and an interior that resembles the dichotomy of a futuristic take on retro styling. The technology system is divided into three distinct pieces; Intelligent Personal Assistant (BMW's version of SIRI), Intelligent Materials (technologically adaptive interior) and Intelligent Beam (next-gen interior projection system).

Although the BMW Vision iNEXT is still in the concept stages of production, a 2021 release is currently scheduled. 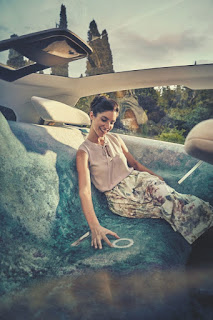 If you are looking for parts or accessories for your BMW vehicle, check out BMW Discount Part's catalog of Genuine OEM BMW Parts.

Popular posts from this blog

January 23, 2019
MINI driver Nani Roma placed at an impressive 2nd in the 2019 Dakar Rally, and a total of 5 MINI vehicles placed within the top 10 which is not a bad feat for a line of vehicles not typically associated with rally races. In case you're wondering, Toyota driver Nasser Al-Attiyah took the honors of 1st place.


Roma was quick to thank the entire squad of drivers, engineers, mechanics and all of the other team members who worked diligently to support all of the MINI teams. Its safe to assume we will see MINI at the 2020 Dakar Rally, and with a bit of luck, and a continuation of the skill we've seen thus far, Roma could potentially earn a 1st place victory.

We would like to congratulate Nani Roma and the entire team of MINI specialists which were involved in the 2019 Dakar Rally, and although the celebration is fresh in our minds, we wish them much success at next year's event.

BMW Discount Parts offers a complete inventory of BMW and MINI parts at excellent prices. If you ne…
Post a Comment
Read more

April 29, 2019
BMW France has announced a limited edition BMW M2 Competition edition that is a throwback to the BMW 2002 Turbo model. Production of the limited edition M2 is limited to a highly exclusive 40 vehicles.


The 410 horsepower M2 Competition Heritage has been fitted with carbon fiber elements designed to enhance the sporty nature of the vehicle. Features include carbon fiber side fins, floating wheel rims, carbon fiber grille, exhaust tips, diffuser, and spoiler. Additionally, the classic BMW motorsport colors have been incorporated as a form of homage to the 2002. The price to own one of these functional works of art is 75,000 Euros.

If you need parts or ccessories for your BMW, check out the BMW Parts catalog at https://www.bmwdiscountparts.com.

July 18, 2019
During the 2019 New York City Formula E race, MINI offered a first hand look at their new Cooper SE Electric model. For those who recall the original MINI Cooper Electric model, a limited few were lucky enough to lease the vehicle when it was released back in 2008, and it served as a late-stage beta test for future BMW and MINI electric vehicles such as the ActiveE and i3. Public interest levels surrounding MINI's new electric vehicle remain high among connoisseurs and casual onlookers alike.

Representatives from MINI have confirmed that the US model MINI Cooper Electric SE will operate on 94Ah batteries similar to the i3. The expected range for the new MINI will be roughly 120 to 170 miles per charge dependent on multiple factors. Although there will be only one battery configuration available, optional components, such as wheels and tires, can affect the range. The new MINI will feature a J1772 charging port which can take an empty battery to roughly 80% in approximately 30 minu…
Post a Comment
Read more